Validity of an Extension of Time for Housing Projects

Buying a house is a huge investment.

Will I get my house on time?

What if the developer fails to deliver?

If you have or are planning to buy a house , you might have had these thoughts float through your mind at some point.

Developers are required to deliver vacant possession of the property within 24 months for landed property, or 36 months for stratified property, from the date of signing of the Sale and Purchase Agreement (Schedule G and H of the Housing Development (Control and Licensing) Regulations 1989).

The Temporary Measures for Reducing the Impact of Coronavirus Disease 2019 (Covid-19) Act 2020 allows a developer to apply to the Housing Minister to exclude from the calculation of time, any period from January 1st 2021 to December 31st 2021. This only applies where the first agreement was entered into prior to May 31st 2021. 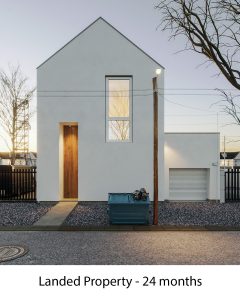 What if the developer states that it has received an extension of time from the Minister, and won’t hand over vacant possession till X months later. Is this allowed?

The Court of Appeal in the case of Bludream City Development Sdn Bhd v Alvin Leong Wai Kuan & 14 Ors and Other Appeals (Civil Appeal No. B-01(A)-55-01/2020) addressed this issue. The Grounds of Judgment for this decision delivered in July 2021, was recently released.

In short, the Minister is allowed to grant an extension of time.

• Sale and Purchase Agreements were entered into between the developer, Bludream, and purchasers of Bludream’s housing units after Bludream had obtained an extension of time from the Controller of Housing to complete the project within 42 months i.e an extension of 6 months from the contractual period of 36 months (First Extension).

• During development, there was a Stop Work Order for 17 months declared by Majlis Perbandaran Subang Jaya due to the discovery of cracks in the neighbouring property, a school building.

• The developer decided to apply for a further extension to complete the project within 59 months.

• It was this second extension which formed the basis of the purchasers’ joint action for judicial review.

Purchasers’ right to be heard before extension of time is granted.

Where the right to be heard is not expressly stated in the statute or regulation, then whether the Minister had taken the interest of the purchasers into account must depend on the particular and peculiar circumstances of each case. In this case, there was no express requirement of a right to be heard that must be given to the Purchasers. What was required of the Minister here was to act honestly and by honest means; to act justly and to reach just ends by just means in relation to natural justice in an administrative law context. The decision of the Minister had to be decided by the light of reason and logic, as well as the exceptional exigencies that existed when the decision was made.

Genuine need for an extension of time to complete.

The Court of Appeal recognized that Parliament, in its wisdom, had granted this flexibility to the Minister in charge so that in valid and worthy cases, a balancing act may be done to extend the time of completion, taking into consideration the delay caused, which was beyond the developer’s control and the extent of completion of the project as a whole and the interest of the purchasers who would be saying that they do not care what is the cause of delay but that they must be compensated under the agreed formula provided in the statutory Sale and Purchase Agreement.

However, the Court felt that one must not end up punishing a developer so as to protect purchasers. The Minister would have to take into consideration all these factors so as to come to a decision that is fair, reasonable and just.

Should the court interfere with the Minister’s decision to grant an extension of time?

The Court is always positioned to review Minister’s decision by way of a judicial review and it would know when to strike it down when it does not comport with the principles of fairness, reasonableness, proportionality and basically human decency.

In this case, the Court of Appeal was satisfied that this was not a case where the Developer was trying to take advantage of the Purchasers but one where, in reality, but for the extension of time and the resourcefulness of the Developer, this Project might well not have been completed, to the detriment of all. The Court was of the opinion that this was a case of a genuine need for the extension of time corresponding to the period of delay caused by the stop work order which was not through any fault of the Developer.

The Court of Appeal’s ruling in this case is important as it limits the principle in Ang Ming Lee and further clarifies that the Federal Court in Ang Min Lee case did not hold that the Minister, pursuant to s. 24(2)(e) of the HDA in regulating and prohibiting the terms and conditions of the contract of sale, cannot grant an extension of time on the ground of circumstances or hardship.

The Minister is thus able to address each case of extension with regard to its unique circumstances, and to grant an extension of time. In this pandemic era, it is in the interests of both developers, purchasers, and the economy to have housing projects completed. The approach taken would prevent unnecessary liquidation of the developer company, and be a step towards improving the problem of abandoned projects.